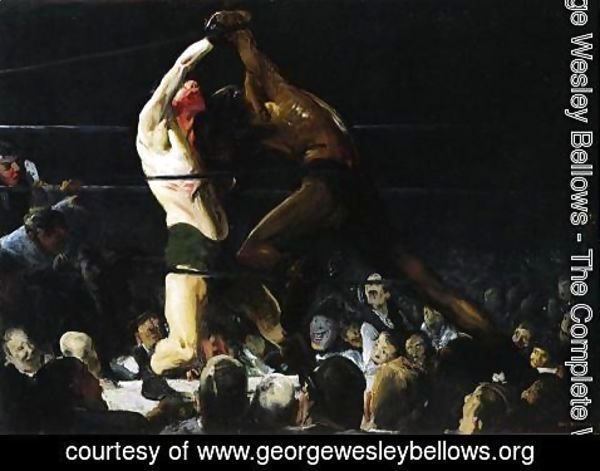 George Wesley Bellows was born in Columbus, Ohio. He attended The Ohio State University from 1901 until 1904. There he played for the baseball and basketball teams, and provided illustrations for the Makio, the school's student yearbook. He was encouraged to become a professional baseball player, and he worked as a commercial illustrator while a student and he continued to accept magazine assignments throughout his life. Despite these opportunities in athletics and commercial art, Bellows desired success as a painter. He left Ohio State in 1904 just before he was to graduate and moved to New York City to study art.

Bellows was soon a student of Robert Henri at the New York School of Art, and became associated with Henri's "The Eight" and the Ashcan School, a group of artists who advocated painting contemporary American society in all its forms. By 1906, Bellows was renting his own studio. 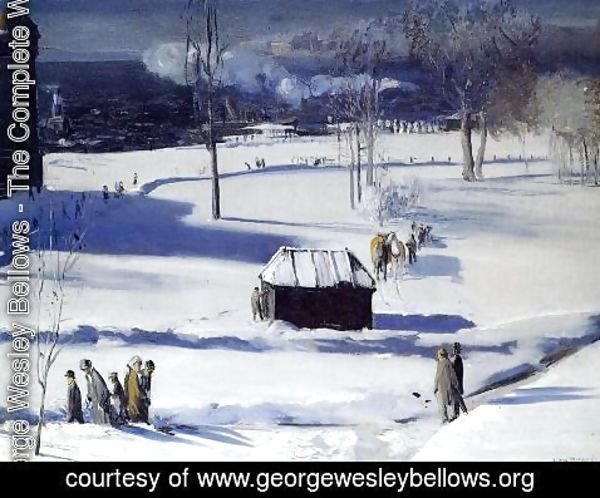 Bellows first achieved notice in 1908, when he and other pupils of Henri organized an exhibition of mostly urban studies. While many critics considered these to be crudely painted, others found them welcomely audacious and a step beyond the work of his teacher. Bellows taught at the Art Students League of New York in 1909, although he was more interested in pursuing a career as a painter. His fame grew as he contributed to other nationally recognized juried shows.

Bellows' urban New York scenes depicted the crudity and chaos of working-class people and neighborhoods, and also satirized the upper classes. From 1907 through 1915, he executed a series of paintings depicting New York City under snowfall. These paintings were the main testing ground in which Bellows developed his strong sense of light and visual texture. These exhibited a stark contrast between the blue and white expanses of snow and the rough and grimy surfaces of city structures, and created an aesthetically ironic image of the equally rough and grimy men struggling to clear away the nuisance of the pure snow. However, Bellows' series of paintings portraying amateur boxing matches were arguably his signature contribution to art history. These paintings are characterized by dark atmospheres, through which the bright, roughly lain brushstrokes of the human figures vividly strike with a strong sense of motion and direction. 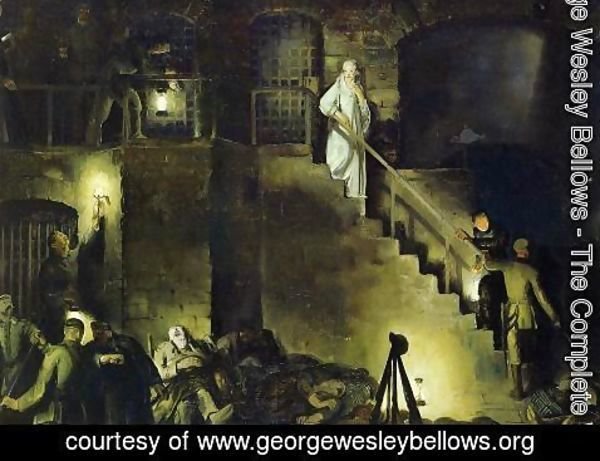 Growing prestige as a painter brought changes in his life and work. Though he continued his earlier themes, Bellows also began to receive portrait commissions, as well as social invitations, from New York's wealthy elite. Additionally, he followed Henri's lead and began to summer in Maine, painting seascapes on Monhegan and Matinicus islands.

At the same time, the always socially conscious Bellows also associated with a group of radical artists and activists called "the Lyrical Left", who tended towards anarchism in their extreme advocacy of individual rights. He taught at the first Modern School in New York City (as did his mentor, Henri), and served on the editorial board of the socialist journal, The Masses, to which he contributed many drawings and prints beginning in 1911. However, he was often at odds with the other contributors because of his belief that artistic freedom should trump any ideological editorial policy. Bellows also notably dissented from this circle in his very public support of U.S. intervention in World War I. In 1918, he created a series of lithographs and paintings that graphically depicted the atrocities committed by Germany during its invasion of Belgium. Notable among these was The Germans Arrive, which was based on an actual account and gruesomely illustrated a German soldier restraining a Belgian teen whose hands had just been severed. However, his work was also highly critical of the domestic censorship and persecution of anti-war dissenters conducted by the U.S. government under the Espionage Act. 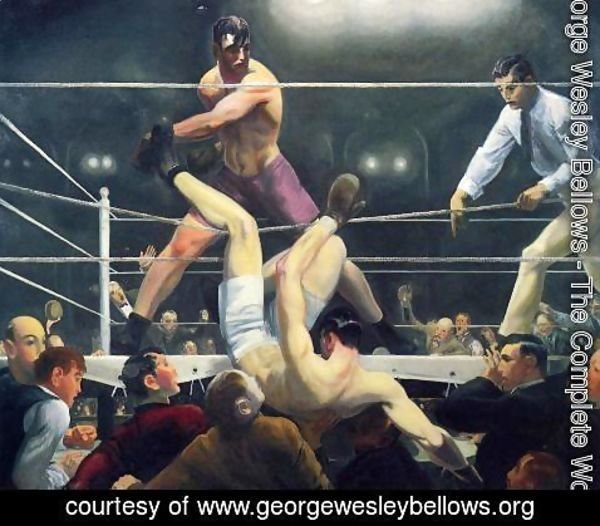 As Bellows' later oils focused more on domestic life, with his wife and daughters as beloved subjects, the paintings also displayed an increasingly programmatic and theoretical approach to color and design, a marked departure from the fluid muscularity of the early work.

In addition to painting, Bellows made significant contributions to lithography, helping to expand the use of the medium as a fine art in the U.S. He installed a lithography press in his studio in 1916, and between 1921 and 1924 he collaborated with master printer Bolton Brown on more than a hundred images. Bellows also illustrated numerous books in his later career, including several by H.G. Wells.

Bellows taught at the Art Institute of Chicago in 1919. In 1920, he began to spend nearly half of each year in Woodstock, New York, where he built a home for his family. He died on January 8, 1925 in New York City, of peritonitis, after failing to tend to a ruptured appendix. He was survived by his wife, Emma, and two daughters, Anne and Jean.

Paintings and prints by George Bellows are in the collections of many major American art museums, including the National Gallery of Art in Washington, DC, the Memorial Art Gallery of the University of Rochester, Rochester, New York, and the Whitney and the Museum of Modern Art in New York. The Columbus Museum of Art in Bellows' hometown also has a sizeable collection of both his portraits and New York street scenes. (From Wikipedia)